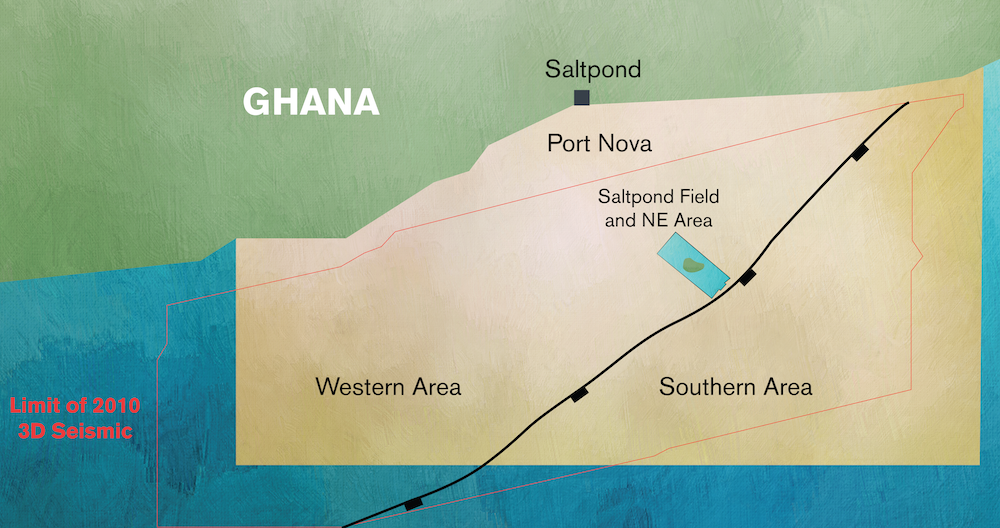 Awarded to Oranto in 2008, Saltpond Annulus offshore shallow water block surrounds a proven petroleum system which encompasses Ghana’s first producing oil field, Saltpond. The license extends 1,500 square kilometers within the Saltpond and Central Ghanaian basins. Saltpond lies to the east of the prolific Tano Basin, which contains the Jubilee oil and gas complex, and to the west of the unexplored Keta Basin. To date, Oranto has completed two sets of 3D seismic comprising a total of 1,000 square kilometers. The data revealed untested structures at the same level as the Saltpond field with several features identifying resources as high as 15 million barrels of oil. The resource potential demonstrates a highly prospective satellite exploration program. Oranto signed a six-year exploration program with an initial three-year phase requiring 1,000 square kilometers of 3D seismic and one exploration well to a depth of 9,000 feet. An initial two-year extension of the first phase was granted until July 2014. A second extension is under negotiation with the Ministry of Energy and Petroleum. Oranto has completed evaluation of the 3D seismic and is planning to drill its first well. The license is operated under a petroleum agreement with a tax rate of 35 percent and a fiscal royalty of 12.5 percent for oil and 7.5 percent for gas. The agreement provides for an additional oil entitlement to the Ghanaian government based on an agreed rate of return formula.

Two distinct petroleum systems to the north and south of the Saltpond fault underscore the prospectivity of this block. To the north lies the proven Devonian system of the Saltpond field, which has been producing since 1978 and reached a peak of 4,800 barrels of oil per day (bopd). The field lies 12 km from the coast and now produces 300 bopd from two wells. Production facilities can process up to 10,000 bopd, leaving enormous spare capacity that makes adjacent satellite discoveries a low-cost proposition.