Newly awarded in June 2017 through competitive bidding from the EG Ronda 2016 licence round. 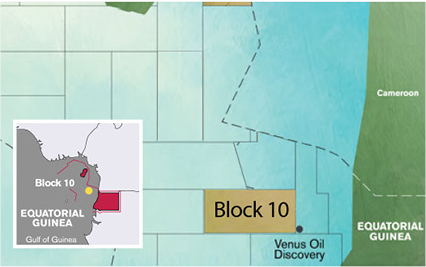 The block has been awarded to Atlas as the Operator with 90% equity with the 10% being held by the South Africa state owned Strategic Fuel Fund. This new award further augments the dominance of Atlas in the Gulf of Guinea, this region being a major production and exploration hub for the company.

Atlas operates Block H adjacent to and immediately north of EG-10. Already mapped drill ready prospects on Block H such as the Amigo prospect (prospective resource of 540 mmbo mean) extend southwards on to the Block H acreage. The play types on EG-10 are anticipated to be similar to those elsewhere in the Rio Muni Basin. Regionally this basin contains a thick, prospective sequence of Senonian rocks with a Tertiary overburden. While good quality reservoirs exist both in the Tertiary and the Cretaceous, the effective petroleum play has so far been restricted to the Cretaceous. Charge is by the underlying mid Albian, source rocks and trapped by overlying Maastrichtian shales and onlap onto the up-dip rift unconformity. The extensive river system which appears to have been active across blocks EG-10 and H from Early Senonian to Miocene times can be traced back to canyon systems in-bound in the southern Block P area (Venus discovery) to the east and south. Structuration in the basin is provided by Cretaceous aged inversion. This sets up the 4-way closed Amigo High spanning both Blocks H and EG-10.